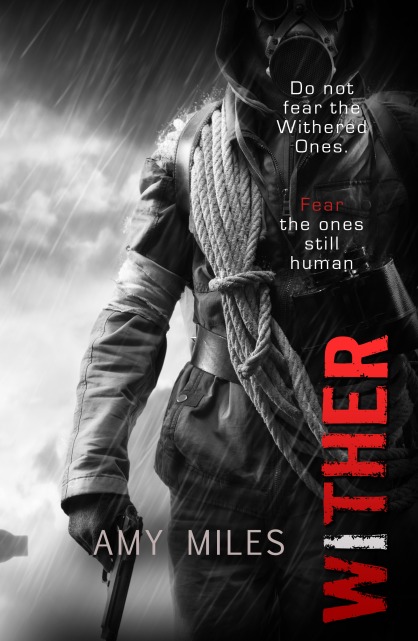 WITHER is finally here, just in time for Halloween.  If you are looking for something that will keep you on the edge of your seat but cant handle the flesh eating, Walking Dead sort of zombies, give WITHER a try.  This book is rated MATURE YA and above.  For young adult readers/parents please read the review posted below to determine if this book is suitable for your teen.  WITHER does contain language, violence and sex.

I always thought when the apocalypse finally began I would be swinging my baseball bat with the best of them, in true zombie slayer fashion. I was prepped and ready to smash in some heads if the need ever arose.

The problem is…no one ever warned me that I would have to fear the humans instead. The ones who still remember their names and how to put a gun to your temple when they want something.

The others…well,they pretty much keep to themselves.

Wither is a psychological thriller that poses the question…what if the zombies aren’t the ones we should fear? What if it’s human nature instead?

How far would YOU go to survive just one more day?

Do not fear the Withered Ones. Fear the ones still human.

IN DEPTH REVIEW OF WITHER by YA BOOK MADNESS BLOG

By YA Book Madness Blog

4.5
I received this book as a gift

Wither is the perfect Halloween read. It’s graphic, full of wickedly grotesque imagery and enough suspense to make nail-biting a habit. Read this with all the lights on.

PROS:
What makes Wither such a stunning and compelling read is the take on zombies and the questions about the nature of humanity. Set in a dystopian world where everyone must fend for their lives against a vile infection that results in a zombie-like state (Withered One), Amy Miles forces the reader to question what people are willing to risk and how far they’ll go to save themselves. When chaos and apocalyptic horrors arise, how much of our humanity are we made to sacrifice to circumstance and how much do we choose to forsake?

The Withered are not the traditional brain-eating, bloody imbeciles with a hunger for human flesh, they’re largely peaceful and helpless, they walk into things, destroying their decaying flesh without a second thought and meander through the decimated city. They’re creepy, yes, and some of these gruesomely graphic images are truly terrifying but as a threat, they’re not the worst that can happen. I appreciated this off-beat spin. When it comes right down to it, who is the real monster, a Withered whose eye-socket is empty and flesh is shredded in ribbons, or the men who abduct and murder without conscience?

The suspense is killer. Edge-of-your-seat, avert your eyes sort of uncertainty. Every scene is made of risk and recklessness, of fear and threats, and what’s more, of the bleak reality that safety is a thing of the past. There’s a powerful sense of foreboding that resonates throughout the story, you’ll be left in a dizzying state of constant tension and fear for the characters.

Suspicion is high and the military is painted in shadow. The rumors of their involvement and the mystery behind their seemingly random actions is a puzzle that grows and builds piece by piece adding to the big picture.

The birthing scene will probably stay with me for life.

Action is high. If you’re looking for explosions, hand-to-hand combat, guns, slaughter, and extremely detailed gore, this is your next favorite read.

The epilogue is a semi-cliffhanger with promise of redemption, revenge, and carnage. The paranoia and confusion over changes in the Withered is thought-provoking and the sense of a huge shift, a new threat is high.

Cable. Cable. CABLE. There’s something warm and cowboyish about Cable. He’s military but has a southern gentleman feel. He’s compassionate, a big teddy bear of a man that’s all sex appeal and fierce protectiveness, the man is a total bad ass. He’s stabbing, kicking, throwing punches, and always putting his life on the line to save those he cares about. His interactions with Avery are playful and charming. He’s wise and brings a smile to the typically downtrodden Avery. The light he brings is pretty miraculous in such a dismal scenery.

Avery is a scared, traumatized girl who has a past that left deep emotional scars. It’s Avery’s past that has made her into a warrior, or at least gave her the tools to become one. At first she is paralyzed with fear, however, when the real horrors begin she learns fast how to adapt and fight for her life. Avery, at heart, is a wonderful person. She cares so much that it clouds her decisions and sometimes nearly kills her. She’s fiery, bold, blunt, and very outspoken. She wants to be heard and roars her opinions.
Does contain what could be considered triggers. Assault, violence, lots of blood and gore, abuse.

Avery makes some arguably stupid decisions. While she does have every right and instinct to withhold her trust and be leery of those willing to help her, it’s pretty clear that Cable is her best bet and a great guy right off the bat and yet, she’s like a panicked, caged animal desperate to flee into dangers far worse than she’s experienced. Avery doesn’t learn from her mistakes, she’s brave but stubborn, she leaps before she looks and ends up in horrendous situations because of her impatience.

Alex’s backstory was pretty absent, as were the stories of some of the other secondary characters. I was dying to know how they got in their position, who they were before, and how the apocalypse changed them.