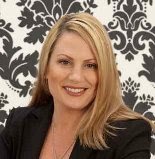 Author Bio: Lauren Clark has been a voracious reader since the age of four and would rather be stranded at the library than on a desert island. In her former life, she worked as an anchor and producer for CBS affiliates in Upstate New York and Alabama. Lauren adores her family, yoga, her new Electra bike, and flavored coffee. She lives near the Florida Gulf Coast. Visit her website at LaurenClarkBooks.com.
What happens when a #1 news team becomes the top story instead of reporting it?
For TV producer Melissa Moore, crisis management comes with the job. From employee meltdowns to her high-maintenance boss, there’s not much she hasn’t seen or can’t handle. But no one—including Melissa—expects a fistfight during the ten o’clock news. When sexy-but-crazy Alyssa Andrews lands a punch on her co-anchor’s face, Melissa jumps on set to help. She’s determined that WSGA’s reputation won’t be destroyed on her watch.
Both anchors are fired and Melissa agrees to fill in—but not before polishing her look from haircut to heels. While the new Melissa wows WSGA viewers, her personal life begins fraying at the edges. Melissa’s husband is away more than he’s home, leaving cryptic Post-it notes in his wake. Her mother’s antics spiral out of control at the nursing home, a friend’s daughter disappears, and a stalker makes Melissa her next target.
What happens next? Stay Tuned…
How long did it take to write the book?  Five years start to finish!  Lots of breaks in between.
What inspired you to write the book?  True Story: Before I began work at an Upstate NY TV station as a reporter, the two main anchors (who were in a romantic relationship) got into a fistfight in the parking lot of the television station. They were fired, it made the newspaper, and a lot of ugly editorials and threats were exchanged. I thought it would be fun to have something similar happen on air and watch what would happen behind the scenes.
Talk about the writing process. do you write at night or in the morning?  I am a morning person!  I need quiet and often hide out in the local university’s library basement (where I have to shut off my cell phone and I don’t have the password for the internet).
Did you use an outline or do you just wing the first draft?  Outline. I have to use an outline or I find myself meandering off into random places that have nothing to do with the plot!
How is your book different from others in your genre?  I have another women’s fiction/chick lit book in the works. I’m also writing psychological thrillers. The women’s fiction/chick lit is a nice break from the heavy-duty research and intricate plotting.
Is your book published in print, e-book or both?  Stay Tuned is available in an eBook and paperback.
Where can we go to buy your book?  Amazon, Smashwords, BN.com
Tell us about your next book or a work in progress. Is it a sequel or a stand alone?  Dancing Naked in Dixie (stand alone). A talented but scattered travel magazine writer is on the verge of getting fired. To save her job, she reluctantly accepts an assignment to cover the city of Eufaula, Alabama’s annual Pilgrimage. She arrives only to discover that a developer has big plans to turn the historic area into a tourist site.
Any other links or info you’d like to share?  http://www.laurenclarkbooks.com
http://www.laurenclarkbooks.org